Our initial plan for Vancouver was just to see the city and area before the Winter Olympics arrived there next year, and though we checked out some books from the library and took some notes ahead of time, we kept our schedule there wide open for exploring.  Temperatures were in the upper 50’s/lower 60’s and overcast in the mornings, so a jacket was in order.

The first morning we went across the street to the ATM to get some of the local currency.  While we were in Canada, we found we were getting about C$93/US$100 exchange rate after fees, which seemed like a good deal, especially considering the convenience.  The SkyTrain station in Metrotown was around two blocks from us, so we purchased all-day passes (C$9 each) which were good on SkyTrain, buses, and SeaBus.

We had heard plenty about Stanley Park (why do I hear “School Days” when I say that?) so that was our first destination.  We were immediately struck by the buildings of Vancouver; throughout the city (and especially concentrated downtown) were hi-rise apartments, of mostly glass. 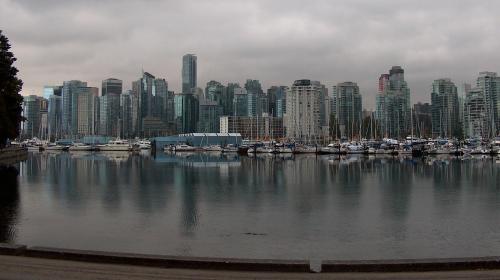 END_OF_DOCUMENT_TOKEN_TO_BE_REPLACED

Following our wonderful stay in the Portland / Salem area, Mo & I boarded the Amtrak Cascades for our trip northwards.  I had thought that it would be a neat idea to take the train northward on what is a scenic route, but we were partially thwarted when BNSF decided it needed to do some bridge work north of Seattle.  We decided we would still take Amtrak, but instead of riding their bus service from Seattle to Vancouver, we would instead rent our car there and drive that portion.