Continuing our visit to London, we left Windsor and went to Royal Botanical Gardens in Kew and walked the beautiful grounds.

After a break at the hotel, we took advantage of the beautiful weather and strolled Kensington Gardens & Hyde Park.

The next morning we had breakfast across from Embassy Row in Kensington Gardens, then took the Kensington Palace tour. Following this, we made our way to Westminster Pier to catch a river cruise on Thames, which wound its way past The Eye, Globe Theater, the Tower Bridge, and on to Greenwich.

With the great weather, Greenwich Park was full of people playing and relaxing in the grass. We made our way up the hill and took our turns straddling the Prime Meridian and then walking through the Flamsteed House. While there I make my second observatory visit on this trip (first being The Round Tower in Copenhagen), and see the Great Equatorial Telescope at the Royal Observatory Greenwich. 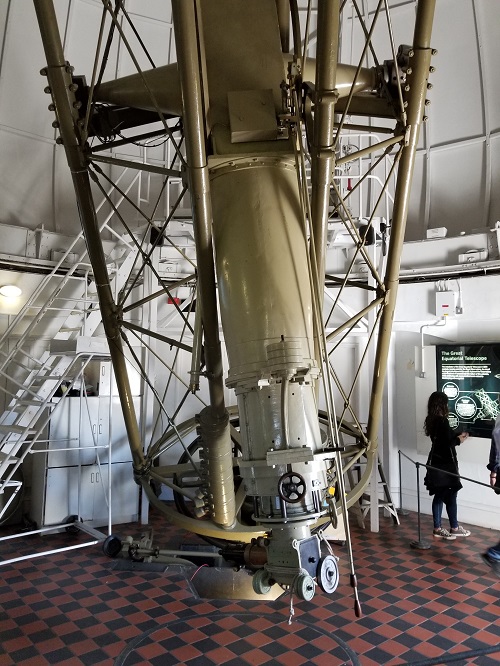 the business end of the 38″ Great Equatorial Telescope in Greenwich

One thing we wanted to do while in London was to celebrate Mo’s birthday, so late Saturday afternoon we made our way towards The Shard (at 95 floors the tallest building in the EU), which had dominated the skyline during much of our day’s travels. We’d made reservations well in advance, choosing Oblix East due to its laxer dress code.

Oblix East is on 32nd floor of The Shard along with a few other restaurants. When we arrived, we each enjoyed a frou-frou drink: Mo had a Plum Rum mai tai, and I had a Rhubarb Bubblegum martini. Our meals were delicious, and Mo was treated with a birthday slice of chocolate cheesecake.

the view from our seat of the Tower Bridge and London

Another plan we’d had for quite a while was John Wesley’s London, a 2½ mile walking tour. Sunday morning we made our way to the start of the walk, which happened to be Wesley Chapel. We we realized that we were less than twenty minutes from the start of the Sunday service, we mutually agreed to forego the walk and instead worship at the birthplace Methodism.

The church hosted a multitude of plaques, stained glass, and other historic ornamentation which we admired while we worshiped. The congregation was festively dressed and very multicultural, including the organist Elvis Pratt who opened with a wonderful organ prelude of First Promenade from Mussorgsky’s “Pictures at an Exhibition”. The service was memorable, and I think I have a new favorite hymn, “My Song is Love Unknown“. Besides the two of us there were visitors from Oklahoma, Wisconsin, and even Essex!

Wesley Chapel, as congregants begin congregating prior to the service

After the service, we toured the church, as well as the Museum of Methodism which is in the church basement.

We made our way to the Victoria and Albert Museum to have a quick lunch and then explore the many exhibits on display there. The weekend brought out a crowd of families and children, and we shared the aisles between the Egyptian relics, classic timepieces, statuary, artwork, and cloth, and furniture. There was something for everyone there. 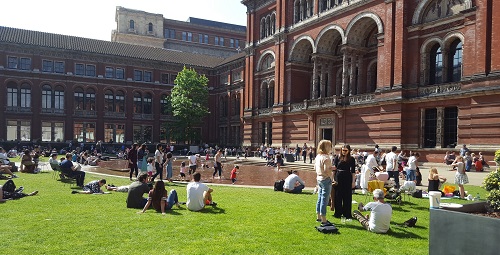 everyone enjoying their day in the Victoria and Albert Museum courtyard

We strolled across Hyde Park one last time back to our hotel to pack up for our Uber ride closer to the airport for our early morning flight the next day. We also Uber’d the next morning to the airport, and when I cashed in the unused balances on our Oyster Cards it was the only time we handled any foreign currency, which we immediately spent on our breakfast before boarding the plane.

The flight home was easier than the flight to Europe…but barely. We made a stop in Oslo, so I can unofficially claim Norway, although someday I hope to visit Trondheim and the home of my ancestors on that side of the family.

We totally enjoyed the time we spent in Europe, and the good news is that there are many more things to see, so someday we’ll need to go back and do it again!

One response to “London, Part 2”