Thought I’d clear out a few photos, etc. in a post prior to my surgery tomorrow…

While doing a bit of last-minute mulching in the back, I came across this little guy, below. Plume moths are cool, but they’re small and hide in the grass, so photographing them is difficult. This one was okay with settling on my hand, and stayed there while I went to get my phone and find a little fading sunlight to take the picture. I haven’t added to my insect photo pages lately, so this will be a nice addition: 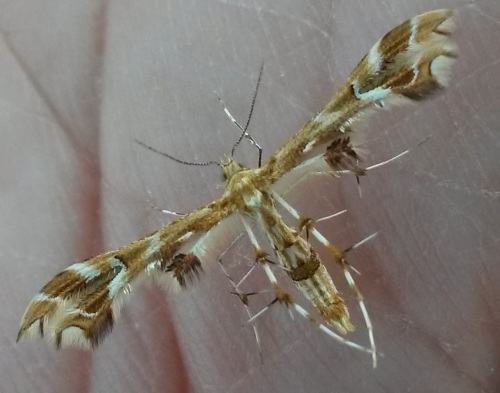 Memorial Day weekend took us up to Chicago area for a wedding, and at the last minute I realized that the Twins would also be playing in Chicago the same time. I was able to take in the Friday night game from the third row of right centerfield at The Cell on a clear, cool evening. While it was a good game, the only runs the Twins scored were in the first inning, when I was still a couple stops away on the “L” red line. The Twins ended up losing 3-2, but haven’t lost a game since.

action from the bottom of the second inning

I’m still actively collecting Twins baseball cards, but things have slowed a bit. Lately I’ve managed to add a few new players to my certified autograph card collection, among those Jim Perry, shown below, along with another Bert Blyleven AU, my 62nd and 63rd different Glen Perkins AU, and some Justin Morneau and Joe Mauer jersey cards.

This year, MLB caught us off guard: we had to make our condo reservations early, and when the spring training schedules came out, the season was starting later than usual. This would call for some strategic planning…

During our Ft. Myers stay, one thing I could plan on was dropping by the practice facilities, so I picked a nice morning, fought traffic off the island, and hung out at CenturyLink Sports Complex with many other Twins fans.

team gathers on the big field for drills

It was great seeing the young ballplayers — Sano and Vargas definitely stand out, size-wise. 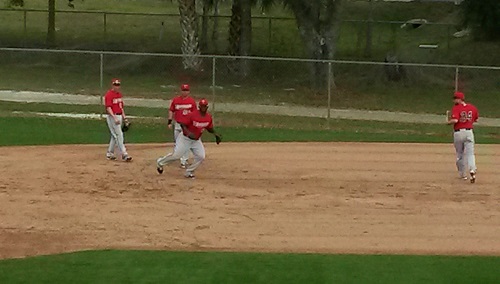 The new coaches were very involved and hands-on in the drills I watched, particularly Molitor, Mientkiewicz, and Guardado. Alumni were also visible all over, including Carew and Oliva. 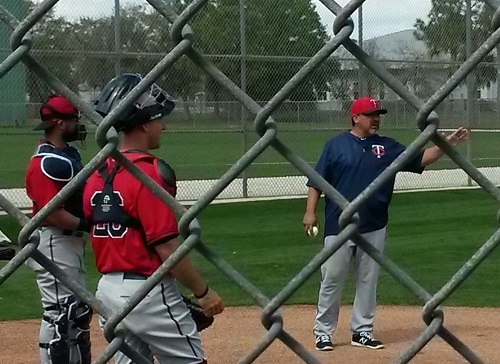 Coach Guardado works on fielding with the bullpen

So, what ballgame did I eventually get to? The only Twins games played in Ft. Myers while we were there were either the home opener, or against the Red Sox at their home opener the next day. There was also a road game against the Tampa Bay Rays at Charlotte Sports Park up in Port Charlotte just over an hour away, though.

The ballpark was quite nice, and the weather was sunny and beautiful. When I bought my ticket earlier in the year, I looked for my traditional spot just past the dugout on the third place side, and I found a nice seat in the fourth row with a great view of the action.

Only one extra base bit in this game, but overall play was pretty clean and still had its share of action. The Rays ended up winning 2-1.

I was able to get three autographs on my program: Max Kepler, catcher Dan Rohlfing, and extra catcher Mitch Garver.