The WordPress.com stats helper monkeys prepared a 2011 annual report for this blog.

The concert hall at the Syndey Opera House holds 2,700 people. This blog was viewed about 13,000 times in 2011. If it were a concert at Sydney Opera House, it would take about 5 sold-out performances for that many people to see it.

The Spookymilk Survivor writer’s challenge for this week was optional, which was a nice touch during the holiday week. The goal was to write a letter from someone totally misunderstanding the basis of a movie.

This was another idea that came out of nowhere, but once I latched on to it, I knew exactly how I wanted to develop it:

The video is of course Emanuelle in Bangkok, which is not at all what Aunt Ella wants to be giving to Timmy, regardless of the video store worker’s recommendation.

And the big payoff: RESULTS. Hey hey, my first immunity! The judges’ comments:

K: The sweet, familial tone here really drives the gag home. Is there really one with the word “Bangkok” in the title? Subtle!

DK: I laughed a lot at this one. I probably like it so much in part because it’s the only one that goes for a praise angle, but the naivete is both believable and hilarious, and it doesn’t drag out too much either.

So I’ve got that going for me, which is nice…

There’s another mouth to feed in the Runner household!

Belle is a 4-yr old Dachshund/Miniature Pinscher mix (Doxie-pin). She loves car rides, barks very infrequently, and is a better fielder than Delmon Young ever will be. And K is already her best friend.

Merry Christmas everyone from the Runner family!

A couple more trade packages arrived under the wire before the holidays, and in them were a few firsts for me:

From Napkin Doon of The Adventures of Napkin Doon (obviously), for a few Rangers cards I upgraded my 1970 Kelloggs Harmon card, and got the aforementioned Pacific relic and eTopps cards.

Meanwhile, from Stealing Home (All Trade Bait, All The Time…) came some 2011 A&G Twins that I needed plus a couple other goodies, in exchange for random HOFers and Dodgers. 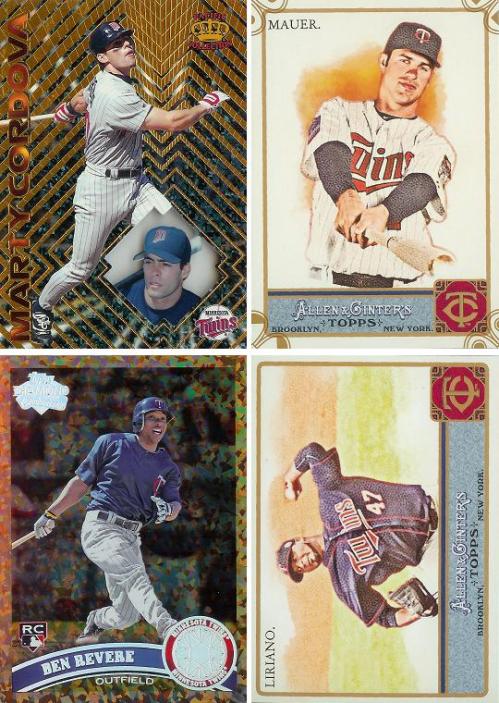 Thanks guys, and happy holidays!

Santa’s Helper Has A Name: goyboy

Back in October I made a big purchase from goyboy at his Blujay Online Market website, and on a whim I recently went back and took a look at what he had there.  Besides several more Twins cards I added to my cart, he fished through some others boxes and when all was said and done, the 200+ cards I bought from him (for a little over $60) topped the 149 cards from the previous purchase.

There is such a variety of great cards, I had to show a sampling from each brand.

END_OF_DOCUMENT_TOKEN_TO_BE_REPLACED

In the past month there were posts by other bloggers regarding how they organize their collections. This (finally) inspired me to finish a couple organization projects that definitely needed completing.

END_OF_DOCUMENT_TOKEN_TO_BE_REPLACED

The Spookymilk Survivor writer’s challenge for this week was fairly straightforward — cliffhanger! In 500 words or less, set up a story that ends in a tense cliffhanger.

I have no idea where the seed for my writing started, but with some careful mental direction, I was able to bring it to a head under the 500 word limit, allowing me to flesh it out a bit more.  After some added details and the usual spit-and-polish, this is what emerged:

One aspect of David Lynch films that I like is that he imbues every character with some interesting quirk, and although I didn’t have the word limit to do this well, but I still enjoy introducing characters into a story. And while I initially was just focusing the cliffhanger on “who will win the auction?”, I liked the Ronin-like guns-in-crowds direction that I folded in. And the winning bidder was #34: we still miss you, Kirby.

Anyway, RESULTS. And how about that — high score, way to go team SPOILER ALERT! Sadly, another non-submission as well, at least on one of the other teams this time. Judges’ takes:

K: Wow, another winner. Cut and paste my notes from the last one. Though it isn’t an action scene, everything else is the same; our characters and their stories are interesting, and we’re heading for something big. 5

DK: This is another one that I think has a strong effort to set up multiple pieces that could pay off in multiple ways, and I think the characters here are a little more defined. Or I just got a huge kick out of the German joke. 5

Many thanks to Mo & K for their input and encouragement.