Managed to come up with a Halloween costume this year…

Sorry, it would not have been worth it to cut my hair short as well.

This was the first opportunity for SPOILER ALERT! to flex its muscles and put something in front of the judges with a player’s contest continuation on the line. Spooky hit us with a nasty challenge this week: Each team will write a story in eight parts with a different writer for each section:

Yeah, it’s a team-building challenge, but man, what a potential logistic nightmare. Google Docs worked well last time around with group challenges, so I set up a sandbox where we could leave ongoing commentary. It didn’t take too long to narrow down a story line, which evolved over time into what we eventually submitted. The section writers’ assignments started out random, and sections shuffled a bit to aid with people’s schedule conflicts. Tragically, although we had the story pretty much done with a day to spare, one section did not get submitted for some reason. Results.

The judges’ comments:
K: I love how unexpected that last bit is – it makes the entire bit, which was already very calm and serene – just as the city certainly is. Two out of three stories this week take place in Kansas. Well, huh. 5

DK: My favorite pure “exposition” of these stories. Sets up the setting really well. 5

Since the introduction of the protagonist didn’t happen until the next section, I chose to focus on the setting, hoping to set the scene by showing a small town where the people were struggling with life. Also, since we talked about a possible tornado warning, I chose a city in Tornado Alley, and I decided an ominous storm on the horizon set an interesting atmosphere, particularly nice since this story was essentially a comedy, so it made the last line of my section really snap. Interestingly enough, one other story was set in southeastern Kansas. The two 5/5 scores were appreciated, but it doesn’t offset the fact that I’m going to have to vote to eliminate someone from the team.

With luck, we can avenge our lost writer with next week’s challenge.

Addendum: Who do I write like, in this challenge?

I Write Like by Mémoires, journal software. Analyze your writing!

Herr Spiegel of Nomo’s Sushi Platter hit me once again for a swap, the heart of the trade an Andrea Ethier GU for a Justin Morneau GU. Spiegel threw in some 2011 singles as well, and considering I haven’t really touched Chrome or Update sets, they were appreciated:

Someday I’ve got to update my 2010s Topps wantlist and get the late year sets in there.

It’s been over a year since my first Spookymilk Survivor writer’s challenge, and I felt sufficiently foolish enough to dive in once more. Survivor X is on!

My talented team of writers is named SPOILER ALERT!, and unlike last time, this mix of participants are folks I don’t know (other than freealonzo), so it will be entertaining to see how our writing styles mesh…or don’t!

The first “optional” challenge, which was not an elimination challenge, was good ol’ friend Fiction 59 — write a story in only 59 words.

I really enjoyed this one last time around. I had an initial idea for this one, and instead of considering other ideas as well, I decided to make myself run with it.

RESULTS My goal was to depict a musician, in this case a young female jazz percussionist, totally over her head, and innocently blowing it. I fell back on an old crutch to depict her downfall, that of adding more cowbell — well, hey, you only get 59 words! No matter how carefully it’s done, adding more cowbell to a jazz performance is probably not a good idea. Both judges picked up the “wide-eyed newcomer” feel of the story that I was going for, and my score was about where I expected.

Next week’s challenge is going to be…challenging.

goyboy <– Check Out His Marketplace!

As a part two to my previous post, while browsing at a site called Blujay Online Market, I kept coming back to lots of neat Twins cards from a seller named goyboy, so I decided to see what sort of order I could put together. While watching a Cardinals playoff game, I put together a $49 order of 140 cards from my wantlists! Too good to be true?

No! So, what was in my order? It included:
END_OF_DOCUMENT_TOKEN_TO_BE_REPLACED

While browsing through my pre-2000 wantlists a while back, my eye caught the two 1990 Donruss Learning Series cards that have been on my wantlist for, well, over 20 years. On a whim, I Googled it, and besides the ever-present eBay listings, I found one listed at a site called Blujay Online Market…for $.10! Turns out Blujay is a free place where people can list items for sale, but the site provides no guarantees that the different shop proprietors there are trustworthy or not. Well, at that price, I’d be willing to give seller logavw a whirl. Besides the Hrbek Learning Series card, I chose seven other cards I needed. Here are a few: 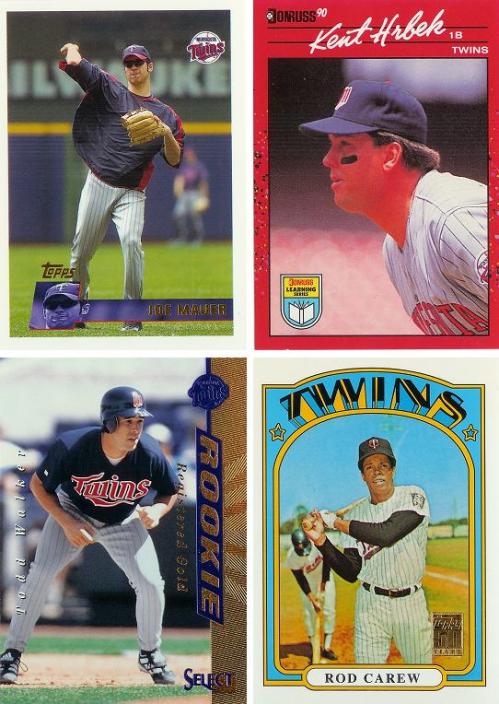 Yep, he was legit, and shipped my cards promptly. But wait until my next post to witness the firepower of this fully armed and operational online market place!

Initially I started a trade with Robert from $30 a Week Habit after seeing several black border O-Pee-Chee Twins cards at his website. It expanded out to include a few 2011 parallels plus some other niceties, all for just Blue Jays cards — what a deal!

Little did we know when we started this trade that our respective “home towns” would be meeting in the World Series. Brian at Play at the Plate sent the cards below plus some of this year’s Bowman Twins in exchange for four GU/AU and some assorted A-Rod and Topps Gold singles. We have both been very civilized about the World Series, with me giving my wishes to Brian that the Rangers don’t embarrass themselves too badly, while Brian equally voiced his sincere concern that the Cardinals’ self-esteem would not be utterly destroyed. Would that the rest of the world got along as well as we do… 🙂

Seriously Brian, best of luck, and thanks for the trade!