This past weekend I flew up nort’ to God’s Country to attend my first Twins game at Target Field with the free tickets I had won. As a double bonus, my baby brother Craigy drove down and we were able to spend the better part of a couple days together as well as the ballgame.

As Monday morning rolled around, we visited a card shop, then spent the next few hours roaming the downtown skyways and the blocks around Target Field.

END_OF_DOCUMENT_TOKEN_TO_BE_REPLACED

Just got back from a quick trip to the Twin Cities, where I took in my first game at Target Field…but more on that in the next post. While there, my baby bro Craigy and I had Monday morning to waste, so I thought we’d stop by Billy’s Sports Treasures in Savage, MN, which I found on the ‘net and wasn’t too far from our hotel. We got there at opening, and spent a very enjoyable hour visiting with owner Bill. He was able to find a handful of cards to trade for from the small box I had brought with me; there were plenty I could have used were I not on a budget (aren’t we all?). I knew going in was that he had three UD Documentary Gold Twins that I needed; I picked those up, and these as well: 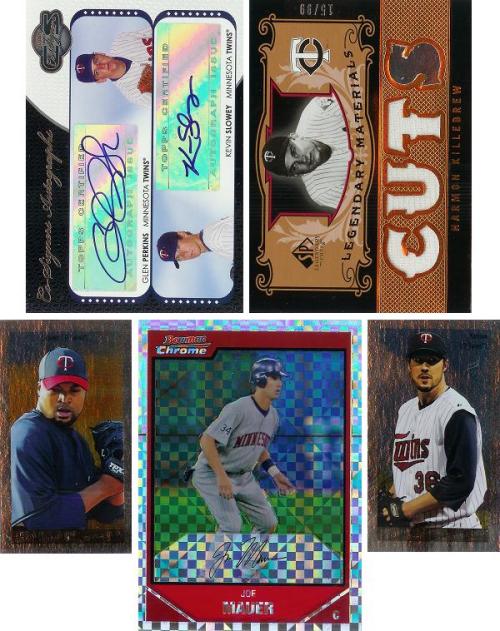 If you find yourself on the south side of the Twin Cities, stop by and check out Billy’s. Or give his website a gander as well. Thanks for your hospitality, Bill!

K is a wonderful daughter and for my Father’s Day/birthday she bought two tickets to They Might Be Giants concert at the Pageant Theater. Well, as the day arrived, she came home from college for the weekend and we (eventually) found ourselves standing just a few feet from center stage.

The Pageant is a great venue; while it might not have been sold out, it was close, but the floor was not uncomfortably crowded. The opening performer was Jonathan Coulton; he and “The Jonathan Coulton Both Stars” very much reminded me of Bowling For Soup. He opened with an amusingly entertaining version of “Mr. Fancy Pants”, performed on…something. I’ve got some Googling to do. After the rest of his band came out, they played “Code Monkeys” among other songs. If I played Portal, I might have recognized “Still Alive”.

TMBG came out firing with several hits (here’s someone’s video of their opener “Dead”), including their new single “Can’t Keep Johnny Down”, several oldies but goodies (“Don’t Let’s Start”, “Birdhouse in Your Soul”, “Ana Ng”, “The Mesopotamians”, and of course “Particle Man”). Linnell rocked the keyboard, accordian, bass clarinet, and Flansburgh, his voice reinforced by a glass of Ecstacy-laced hazelnut LSD (well, that’s what he said it was) was very entertaining. My voice was a bit sore from providing the tragically missing high third to the harmonies, and K and I found them to be a lot more fun live than we were anticipating.

It’s safe to say a good time was had by all.

One of the unexpected bonuses of Maddux Glavine and Smoltz is that Chris has summarized his wantlist in his blog’s title. When I’m at my LCS and see a Greg Maddux, Tom Glavine, or John Smoltz card, one trader immediately comes to mind. Well, after sending a few on their way to Chris, here are some he fired back in my direction: 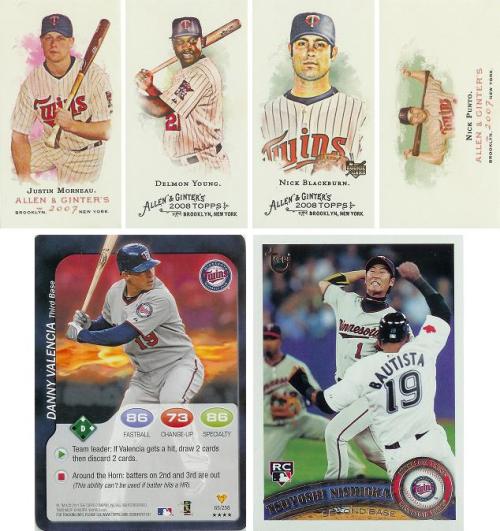 Another SportsCardFun trade, this time with zak4040, sending some Yankee cards for these and a 2007 Topps Morneau red letter parallel:

The Night Owl from Night Owl Cards put together a trade for a couple Nomo cards from my Dodgers trade bait post; here were some of the cards he sent along…

…but more importantly, Night Owl had a particular card I had been looking for lately. Mo and I were invited to the wedding of the daughter of friends of ours, which was held last night at…the Lemp Mansion. If that sounds familiar, it’s because it was on one of the 2011 Allen & Ginter’s “Uninvited Guests” mini set. Anyway, it was nice to be able to include this card with our gift to the happy couple. And I’m not sure if anyone there was an Uninvited Guest or not, but if they were, they had a good time!

After a month of cordial emails (interrupted by a hurricane evacuation) between clintmoody59 (another SportsCardFun trader) and I, we settled on a trade that saw autograph cards of Twins prospects in three different Bowman products make there way into my collection:

Take a look at his Bucket List photos and see if you can’t also work out a trade with him. Thanks Clint!

Uh, no thank you — the cards by themselves are just fine! Herr Spiegel from Nomo’s Sushi Platter expressed interest in a Beltre jersey card from my Dodgers trade bait post, and between us we worked that into a neat little swap: