You know the drill: looking to trade for Twins stuff off my wantlists — click on the “Continue reading” link below to see the cards.

END_OF_DOCUMENT_TOKEN_TO_BE_REPLACED

How Could A Trade Be Any More Funner?

We always got a kick out of my youngest brother describing something as “more gooder” than something else, and I am reminded of this every time I see Julie’s blog Things are Funner Here. A few weeks back we started up a trade, and this past week our packages crossed paths on their way to their prospective new homes.

Thanks for the trade, Julie – enjoy your Phillies cards!

Southern Beauties, And A Cautionary Tale

I haven’t posted any insect photos in quite some time. Hence the cautionary tale: I had my “working files” of photos to polish off and post stored on a flash drive, along with some back-up files of other miscellaneous items. Well, at one point a couple months ago, the flash drive stopped being recognized by any laptop or PC I plugged it into. I don’t know that there is any real way to rescue files off a malfunctioning flash drive, but I have to think the multitude of the unposted photos are gone. 😦

While on our Ft. Myers vacation trip, I kept my eyes open for any possible photo opportunities with the regional insect life, and it ended up paying off. The best pics were taken on our day at the Edison & Ford Winter Estates, which isn’t too surprising given the multitude of flowering plants and shrubs there.

The first photo was taken of a familiar friend, a Tersa Sphinx moth just inside the screened porch of the caretaker’s house. The woodgrain pattern on the wings and body is quite eye-catching.

While wandering along the waterline and dock area, I saw this skipper perched on a relatively bare shrub. A plain skipper like this one isn’t easily identified (initially I guessed it might be a Swarthy Skipper or somesuch) but given its size, it’s no doubt a Monk Skipper, indigenous to the area. Got a little eye damage, too, from the looks of it.

Lastly, while wandering the floral area near the gift shop on the way out, I stalked this Gulf Fritillary for a while. Like its name sounds, they are very flitty, and with the breeze that was blowing I was lucky to even get a photo as still as this one ended up. The bright orange color looked very striking among the flowers there.

Well, getting back to my cautionary tale, the moral of the story is always back up your files, no matter where you keep them.

Heard a song on the car radio last night that sounded like Fall Out Boy meets “Penny Lane”, and after checking the lyrics on teh Google, found out I was pretty close.  Well, since K is coming home for Spring Break today, I used it as a Pandora seed and created today’s list (it’s the first song):

There.  And I survived, too.  But time to switch to some pretentious epic polymetric instrumental music now, though.

Tagged All-American Rejects, Boys Like Girls, Fall Out Boy, Panic at the Disco, Plain White T's, Reliant K, The Fray, The Killers, We the Kings

Just picked up my first of this year’s Topps Heritage, and when I saw this card, I immediately considered it a great candidate for the next NCIS: Duryea, PA post:

This was from a Target blaster. So, what can we uncover here?

Here’s what I noticed initially:
1) that’s backup catcher Drew Butera bearing down on Jeter
2) it’s a day game; makes sense for “Butters” to be catching
3) he’s not necessarily all that fast, yet he’s there with his take-out slide
4) take look at the ball in each frame

Once again the gang at WGOM has nailed this one. Here are the findings:
– Butera only played in New York on two occasions: May 15th and May 16th
– on the 16th he was only used as a pinch runner for Jim Thome, and scored on Jason Kubel’s grand slam
– the only time he was on base in the other game was after a leadoff single in the top of the 8th. He was out at second, but on a Denard Span 1-6 fielder’s choice.

So, it’s as was initially expected; Jeter does NOT make the double play. Looks like we can call BS on Topps for this one.

The Twins, In No Particular Order

About the beginning of this year I approached Tom at The Angels, In Order about a Twins/Angels swap, and probably against his better judgement, he took me up on it anyway. Once we finally dotted the I’s and crossed the T’s, I’m not sure how Tom sits with his end of the trade, but I’m tickled pink with all the nooks and crannies of my wantlists that he was able to fill in.

Included were several 2003 MLB Showdown cards, Bowman, … really, a little of everything.
END_OF_DOCUMENT_TOKEN_TO_BE_REPLACED

Once again we included a Spring Training game in our vacation at Ft. Myers, and once again we scheduled our trip to include the Cardinals March 7th visit to Hammond Stadium. The tickets I picked up were just two down from last year’s seats, fourth row just downfield from the Twins’ 3rd base dugout. The weather was sunny and ~80°F with a light breeze, so we were workin’ the sunscreen.

We were parked on Puckett Pkwy this year, and noticed Hammond Stadium again had a liberal sprinkling of Cardinal Red shirts in the capacity crowd. Who were the first ballplayers I saw when visiting the neighboring practice field? 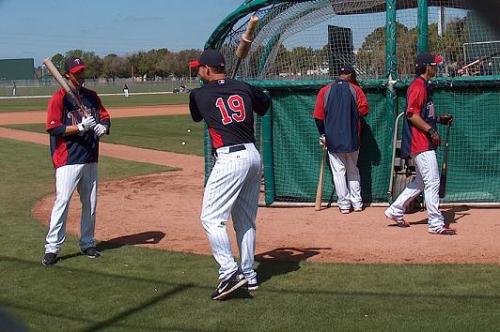 END_OF_DOCUMENT_TOKEN_TO_BE_REPLACED

Okay, what started out as a small trade for a 2003 Topps Gold card with Madding of Cards on Cards (and an excuse for him send me the booby prize for last place in his college bowl game pick ’em contest) turned into a massive team dump, and now I’m scrambling to find some suitable stuff in return.

This is the first time I’d seen any cards from the 60-card Holiday Inn set; turns out I need a Mauer card, too.
END_OF_DOCUMENT_TOKEN_TO_BE_REPLACED