The Eyes Have It

The hazel eyes of Lonestarr, that is. The proprietor of Behind These Hazel Eyes contacted me about the Cubs trade bait post from a while back, and for a couple relic cards and some other Cubs paraphernalia, I became the recipient of a Twins team dump. Well, and some other nice cards I needed, too — among them my first Twin from the Pack Wars set, first Sweet Spot Update card, first Fleer Legacy card, a couple autos (“The Real Deal” Durbin!!1!), and several TriStar cards (including a Ben Revere parallel #’d to 50). I don’t actively collect Twins minor league cards, but I also don’t turn them down.

One of these cards is not like the other… 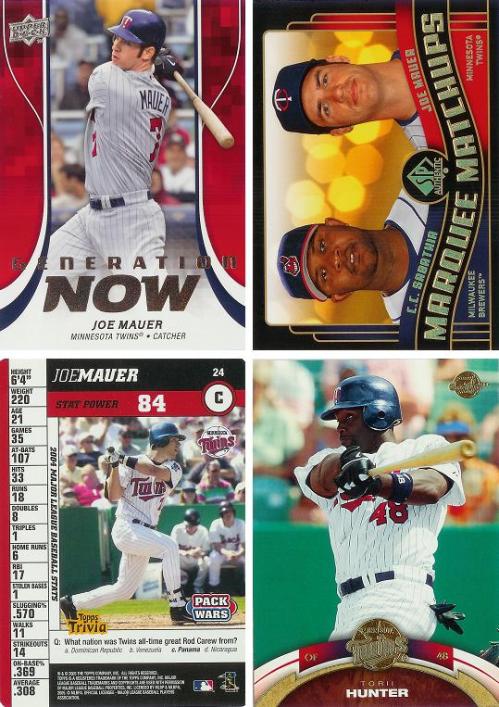 Thanks for the trade, Lonestarr! Keep your (hazel) eyes open for any other Twins cards in the future.

McLean, Virginia that is, headquarters of USA Today, the publishers of the former Baseball Weekly, where this week’s Detective Work photo was found. I loved this one when I saw it the first time, and clipped it for posterity.

What can we find out about this particular photo? These are some things I can tell you up front:
1) it’s Chuck Knoblauch making the acrobatic play (duh)
2) Twins are wearing their road pinstripes
3) from the stats on the back of the photo’s page: Knoblauch had played in 93 games (with an OPS of .846) by that point in the season

Well, the gang from WGOM again took to the challenge (once more led by a bored Andrew) and ran with this one, and here’s what they decided:
– based on the outfield scoreboard, pitcher #37 of Montreal was taking on pitcher #29 of Atlanta; the Expos have 0 runs in the 3rd inning
– John Smoltz wore #29 for the Braves; #37 is Pedro Martinez. This game is in 1994.
– on July 25th, the two faced each other in Atlanta (this game) while the Twins played in Texas
– of the two ground balls to Knoblauch that game, the best candidate is an Ivan Rodriguez offering to Knobby’s right in the 3rd inning. Both games started at the same time, so the matching innings are a good fit.
– 2nd base ump is Terry Craft, while Pedro Munoz watches on from left field.

The other two trade packages to arrive (both from Braves collectors) while I was away were both of the 1-or-2 card variety. One package was from Derek at Tomahawk Chopping – Cardboard & More, and contained a Santana Ultimate Collection card he had on a trade bait post that I swapped for some Chippers — bonus points for being the first Twin from that set for me. The second package was from Colbey at Cardboard Collections, and had an O-Pee-Chee box bottom and a Diamond Anniversary Platinum card he exchanged for some 2011 shiny — bonus points for him for knocking out an early 1990’s card and for first of the 2011 sparklies.

Thanks for the trade, first-timer Derek and long-timer Colbey!

Got a lot of trades in the works lately, and packages seem to arrive en masse when I’m on my Omaha business trips. I joke with Mo that she needs to take a shipping dolly out to the mailbox with her to schlep them all back to the house. Well, this past trip was no different (except that it didn’t blizzard in Omaha while I was there!) — here is the first package that came in:

The LCS had a Rickie Weeks relic card, and I noticed that Cameron at Cardboard Heaven had Weeks in his PC list, so I contacted him about a trade. Cameron responded favorably, and had several nice Twins cards to trade, so I expanded my offering to include some Gwynn cards and others. On his end, he sent several Bowman cards from my wantlists, a nice Mauer and Carew card (I grew up idolizing Carew), and some SP Rookie Edition cards:

The Don, Wicked Ortega, took me up on the Mets trade bait post a while back and traded for some vintage cards. His return package had a slew of colorful shiny in it from my wantlists (Topps, Heritage, & Bowman chrome, Topps Archives Reserve, etc), but in an about face, I’m going to feature the non-shiny cards that he sent:

Something From Dad, And A Cautionary Tale

[my cautionary tale follows the break at the bottom]

Baseball Dad (from All Tribe Baseball) and I have been toying with a trade for many months now, only to be thwarted by computer troubles, family events, natural disasters, riots, a National League World Series winner…you name it. Well, BD got fed up and finally just sent me some cards (your cards are on their way, btw!). It was a great mix of this-and-that — here are a few of them: 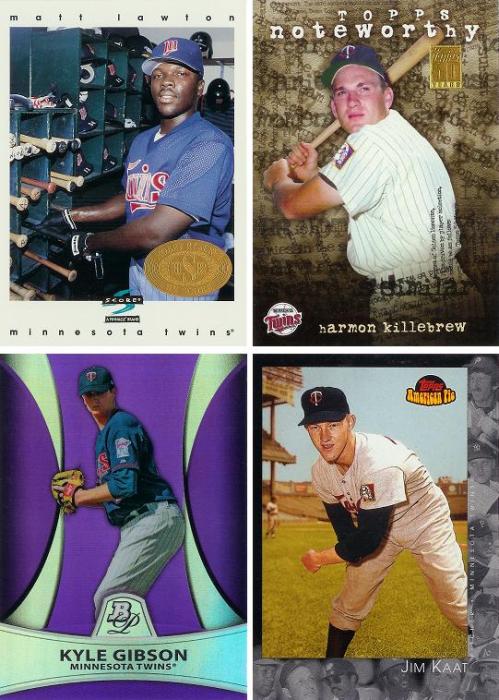 Hopefully as we further sort through our cards, we can continue to swap cards with each other; we AL Central types have to stick together, you know. 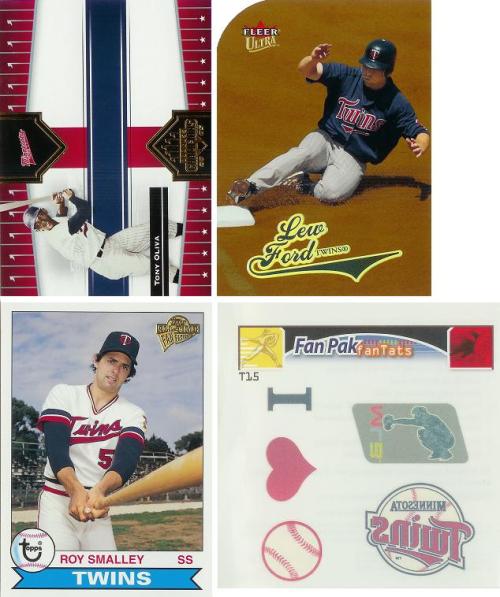 END_OF_DOCUMENT_TOKEN_TO_BE_REPLACED

Hats off to IBM’s Watson computer for kicking some royal Jeopardy! butt this week.  This weeks’ 10 random tracks are from Live365 using “fusion” as the genre search:

This has got to be one of the best card photos from 2011 Topps series 1:

I pulled this from the four rack packs I picked up last weekend. What can we find out about this particular photo?

Well, a three things immediately jumped out at me:
1) it’s at Target Field in Minneapolis
2) it’s a day game
3) it is not Joe Mauer behind the plate
The lack of “knee blocks” behind the catcher’s knees was the giveaway to me that this was a backup catcher. Gardy likes to use a backup on day games following night games, so this is consistent, too.

Well, the gang at WGOM has taken the investigation further. To summarize:
– the Twins played the Tigers in only two day games at Target Field, May 5th and June 30th
– it’s not Jose Morales catching; he uses a hockey-type mask
– it’s not Wilson Ramos catching; he uses an UnderArmor chest protector; here he is on May 5th
– the mystery catcher is Drew Butera! “Butters” caught the June 30th game; here he is that day
– umpire is #52, Bill Welke
– the Twins won by a 5-1 score; Slowey gets his 8th win, and Morneau his 16th HR

Andrew and everyone, you’re dogs with a bone on this one — way to go. And judging from the photo, it looks like Magglio got under it and pulled it to left, which (assuming it’s not a foul ball) means it was his single in the 4th inning. Here’s another photo of that AB (from ESPN): 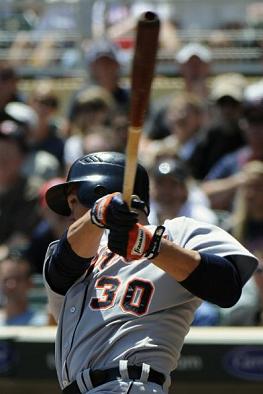 PS: if you really want to see Mauer on a 2011 Topps card (he’s scheduled for series 2) I suggest this one.