One of the reasons we chose Ft. Myers, FL for our vacation, besides the beaches and the warm weather, was of course it’s the Spring Training home of the Minnesota Twins. A quick look at the schedule and we HAD to see the March 9th game vs. the St. Louis Cardinals.

The weather was overcast but a warm 72°F — a perfect day, if the sprinkles hold off. We parked on Battey Blvd, and walking to Hammond Stadium we got plenty of remarks on our attire; Mo was wearing her Cards shirt, while I wore the Twins away gray pinstripe jersey. Our response was that we had a “mixed marriage.”

one of the first things we saw was at the batting cage on the neighboring field: from left, Tony O., Gardy, and Rod Carew with a bat in hand

Our seats were great; if I leaned way out over the row in front of us, I could have touched the back corner of the Twins dugout. MLB Network was taping the Twins’ episode of 30 Clubs in 30 Days, Mark McGwire was making the rounds, and Pat Neshek was signing autographs nearby, so there was plenty to hold our attention prior to the game’s start. 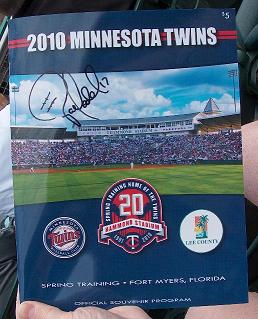 The vocalist for the national anthem was sick, so the entire crowd did the honors, and we had some nice harmonies going. The Twins had pretty much their Opening Day starting lineup, and it was my first chance to see new Twins J.J. Hardy, Orlando Hudson, and Jim Thome in a Twins uniform.

The scoring started early, with the Twins holding a 4-3 lead after two innings. Even _elm_n Young managed a triple. There were several displays of great glovesmanship, including a couple grass-level catches by DSPAN2 in center, and nice infield plays by Punto, ‘Lexi, and Tolbert.

Like all early Spring Training games, several pitchers got their shot during the game, but still LaRussa managed to squeeze in a mid-inning change. Very light sprinkles kicked in a couple times later in the game, but no more than a few drops here and there.

Carl Pavano pitches with one on in the first inning.  Note Matt Yallof just above the baserunner, still taping for the MLB Network show

Jeff Manship’s pitching failed to impress, as the Cardinals scored some mid-game runs to take a lead.  A couple runs back tied up the game, and as we were just about to wonder if we’d get extra innings, future third baseman Danny Valencia remedied that situation with a solo shot in the bottom of the eighth.

Danny Valencia scores, while Ben Revere and the ump make sure he touches home plate

Before the ninth inning, it was announced that the attendance set a new Hammond Stadium record for a Twins’ Spring Training game — 8,220.  There were many Cards fans present, particularly since the Cardinals played Ft. Myers’ other home team, the Red Sox, the day before.  Kyle Waldrop ended the game by picking off the runner at first, and overall, a great ending to an excellent day at the ballpark!