We had decided prior to our trip to head back towards Portland a day earlier, so that we wouldn’t have to make the entire trip from Vancouver to our 4PM flight at Portland International in a single day. Wanting to get through Seattle before settling down for the evening, we chose Tacoma for our stopping point. This time it took quite a bit longer to get through the border check, but once we explained that a “trivet” was a hot plate, all was fine. 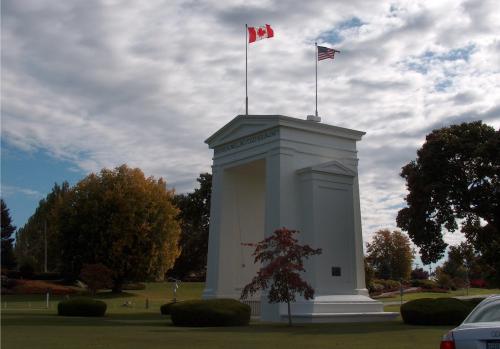 Waking up on our last day in the NW, we thought it would be fun to drive towards Mount Rainier.  It was just under an hour to get to the park entrance, but since we didn’t have a whole lot of time to spend, we decided instead to continue back and towards Hwy 5.  It was at this time that we stopped at a small open meadow that afforded us a beautiful vista of the peak. 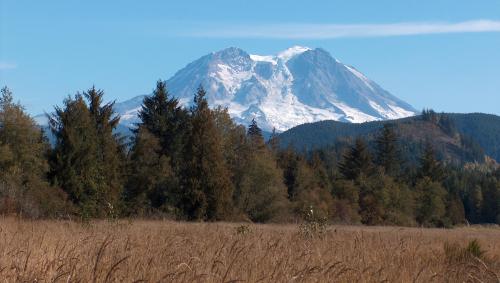 the southwest face of Mount Rainier

Not too much farther along, we braked quickly for a “Mount St. Helens viewpoint” sign, and after driving a mile off the highway we found ourselves staring over a rise at the lava dome and the open section of the mountain’s crater, only 24 miles away in the light haze. 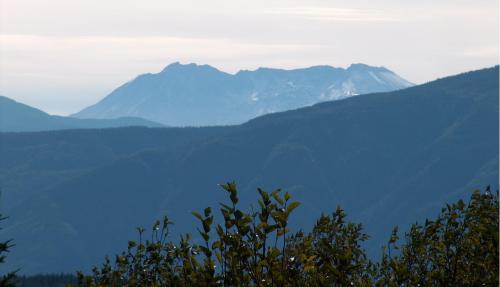 We both agreed that the relaxing drive winding between the mountains was a highpoint of the trip, after spending the last few days among crowds of people.  And our Dodge Caliber rental car performed nicely and got economical gas mileage.  After returning to Hwy 5, we made our way into Portland in fine time to grab a bite, turn in the car, and get to our flight home.

Epilogue:
The strangest part of our entire trip occurred on our way home.  After our Southwest flight was completely boarded, a mid-20ish man got up and hustled back out onto the ramp entry.  After a short confrontation, we heard a flight attendant saying, “No, don’t go there!” and saw a blue flash go by our 2nd row window.  The man had squeezed between the aircraft and accordioning canopy of the jetway entrance, and leaped down to the ground, where he ran around the engine and under the wing out onto the tarmac.  After he was rounded up, and his bag(s) was fished out from underneath, we were on our way (finally), but even later than we would have been without the hubbub.   One of the flight attendants suggested they thought our jumper may have been suffering from bipolar disorder.

At least six of us on board had only a 25 minute turnaround scheduled for our connection in Denver, but we were assured they could make up some time and possibly hold the connection, so don’t give up hope yet.  Well, it turned out that our connecting aircraft was much later than we were, and we ended up waiting over an hour, followed by more delays while we waited for a replacement flight crew.  Our heads finally hit the pillows (in our own bed!) at two in the morning.

One response to “Our Anniversary Vacation – pt 4: Mount Rainier”