Good friend Karl from church had an extra work ticket to share for the Saturday ballgame, and I thought I’d share some pictures from the game as a way to take my attention off the suck of the Twins/Yankees series so far. 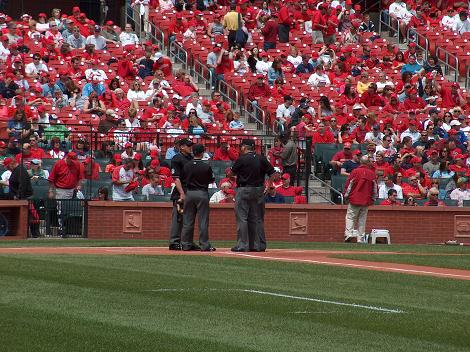 “Yeah, and I never got my underwear dry from yesterday’s rainout.”

The weather was perfect (upper 60’s, slight breeze), and the seats were magnificent: 3rd row down the first base side. 43,382 attended the game, and although I was decked out in Twins garb, I only got grief for it once (apparently there is a special port-a-potty at a different location for Twins fans, I found out).

For God’s sake, LaRussa is the manager; how can you only provide nine lines to work in?!?

Pitching for the visiting Brewers was former Card Jeff Suppan, and for the Cardinals, that tall drink of water Adam Wainwright — and a pitchers’ duel was on.

Pujols awaits Suppan’s pitch in the first, while Prince holds Robinson at first

They handed out All-Star ballots to the fans in attendance, and I’m a little peeved that I fouled mine. Perhaps I was still amused at voting for Alexi Casilla at 2B (gotta vote the Twins staight ticket), but I’d already punched Delmon’s name before I’d realized that Denard was the odd man out in the Twins’ outfield All-Star name submissions. Travesty!

Wainwright gave up an early HR to Corey “I Wear My Sunglasses at Night” Hart, and it was only one of two hits the Brewers would get. The 2hr 31min ballgame skipped right along until the last couple innings, and then the pitcher substitutions started up. The middle pitcher of the Cardinals’ 3-pitcher 8th inning was a familiar face:

So, for two outs, does that make him a L2OGY?

Final score ended up Brewers 1, Cardinals 0. The HR was the only extra-base hit of the game. And I have to say, the new Busch Stadium beats the old Busch Stadium hands down. All in all, it was a great day to be at the ballpark. Oh, and I was keeping a weather eye out on the out-of-town scores: 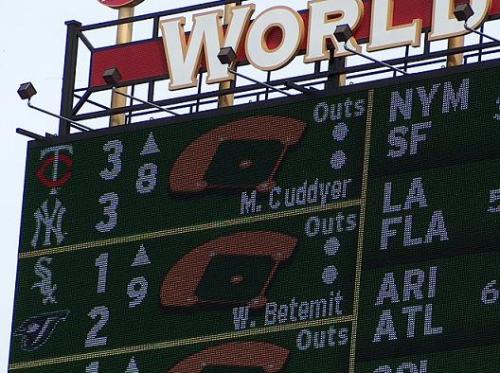 Yeah, they tied it up! This could work out well…

One response to “Pitchers’ Duel”